Alicante El Altet Airport, airport code ALC, handles eighty percent of the total international flights to reach this region. Most incoming passengers are from the United Kingdom, Germany and Holland. Based on passenger numbers, in 2009 it was ranked the sixth busiest airport in Spain and one of the 50 busiest airports in Europe. Servicing one of the most dynamic and main economic zones of Spain´s Mediterranean coast.

In 2011 a new terminal building was built which replaced the two old terminals, thus increasing annual airport capacity to 20 million passengers. The airlines that handle most passenger traffic here include Ryanair, Easy Jet and Air Berlin.

Be prepared to tour the sites in the comfort and leisure of your rented 7 seater, 9 seater, minibus or minivan car hire vehicle and enjoy the best mode to get around by booking your individual discount rent a car in Alicante Airport, Spain online.

For car rental in Alicante Airport, you can easily access the desks of most rental companies from the arrival area as well as from outside.

Counters for major car hire companies are right before the exit gate of the arrival area. Conveniently located for you to collect your prebooked rental car in Alicante Airport, Spain.

Before arriving to Alicante Airport, make sure to book a discount car hire vehicle.

Our search engine will find for you the best car rental discounts at Alicante Airport, Spain.

If you need assistance booking your rental car, check out or section How to book a rental car in Alicante.

Overlooking the city on top of Mount Benacantil this location offers amazing views and a rich history. Open during the summer (April – Sept.) from 10am to 10 pm and during the winter months (Oct. - March) from 10 am to 8pm, it is one of Spain's biggest medieval fortresses. 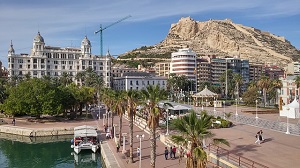 Founded in 1932, visitors today may enjoy an avant-garde method of experiencing archeology supported by modern audiovisual technology. It is open from Tuesdays to Saturdays 10am – 7pm. Sundays from 10 am – 2pm. It closes over lunchtime during the summer months.

Tour museums and other sites in Alicante, Spain in a car hire vehicle from Alicante Airport. Your own rental car will make your visit to Alicante even more delightful by being able to decide your own routes and schedules when driving in Alicante, Spain.

Located 11 nautical miles offshore, opposite the city of Alicante, it is the only inhabited island in the region of Valencia featuring beaches with crystal-clear waters, a variety of flora and fauna, restaurants and a picturesque fishing village where visitors may dine and shop around.

How to Get There: The island may be reached by boat from Alicante, Santa Pola, Guardamar, Torrevieja and Benidorm.

From Alicante, Empresa Kontiki can get you there, during Easter and summer, every day of the week and several departures are made during the day. However outside the summer season, trips are made on Thursdays, Saturdays and Sundays. Journey time is approximately one hour.

Visit our page for Tabarca Island and get the whole picture.

Features two UNESCO World Heritage sites to visit. The first is El Palmeral, which boasts over a million palm trees and the second is the Misteri D´Elx medieval play which is an ancient liturgical drama performed out in the Santa Maria basilica.

Other famed sites include La Alcudia archaeological site, the Moorish tower of La Calahorra and the Altamira Palace.

How to Get There in a rental car from Alicante:

From Alicante take the N-340 or the A-7 road towards Murcia and that will take you straight to Elche.

This quaint village populated by about 200 inhabitants is a must see in the region. Nestled in a stunning valley surrounded by the highest mountains in the province, it is famed for its history and castle declared to be an Asset of Cultural Interest in 1974.

Drive here in comfort and freedom with a car hire vehicle in Alicante Airport.What better way to experience Alicante than in your own rental car in Alicante, Spain