You are most likely to arrive in the Netherlands via Amsterdam Schiphol Airport (IATA: AMS, ICAO: EHAM), which is the main international airport of the Netherlands.  It is just 9.1 km southwest of Amsterdam, which takes 20 minutes by car hire from Amsterdam Airport.

Schiphol handles roughly 47 million passengers per year, and has five main runways. The airport has large shopping areas, a museum called the Rijksmuseum, with free admission and both contemporary and classical art displays. It even houses its own mortuary.

The city of Amsterdam has a rich history and a high cultural and financial status in the world.  The Amsterdam Stock Exchange is the oldest stock exchange in the world and many of the world's top 500 companies, including Philips and ING are based in the city.

Amsterdam's main attractions - including its historic canals, the Van Gogh Museum, and its many cannabis coffee shops - attract more than 3.66 million international visitors per year.  Tour Amsterdam starting after your arrival by Amsterdam Airport car hire.

Car rental counters at Amsterdam Airport are conveniently located in Schiphol Plaza. You'll find it easily after arriving, in the Arrivals Hall in Schiphol Airport

You'll get amazing discounts and car rental deals from Amsterdam Airport for 7 seater, 9 seater, luxury cars or any other type of vehicle you require for your car rental needs. 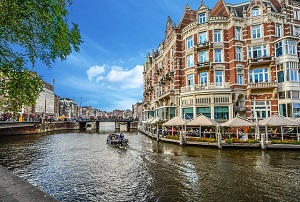 Visit the old centre of the city which dates back to medieval times.  Two medieval wooden houses can be found here.

The Begijnhof is a late-medieval enclosed courtyard surrounded by the houses of Beguines. These were Roman Catholic women living in a semi-religious community.  House number 34 in Begijnhof is the oldest home in Amsterdam.

Not the oldest of the five main churches in Amsterdam, but the Westerkerk definitely provides the best view.  The church is open and free for visitors from Monday to Friday, April through September.

Located on the Westermarkt near the Anne Frank House, climb the tower with a guide, where in good weather you can see all of Amsterdam as far as the coast!  The perfect place to plot the rest of your sight-seeing journey with your hire car in Amsterdam, Netherlands.

Stop by the very culturally significant and touching memorial to gays and lesbians murdered in World War II.

Homomonument is a call for vigilance against homophobia and an inspiration for gays and lesbians the world over.  Located between the Westerkerk and the Keizersgracht canals.

Take your Amsterdam car hire out for a shopping trip to the Dappermarkt, voted best street market in the Netherlands!

Pick up souvenirs, a couple of things for yourself or local produce.  Here you can find everything from clothes and flowers to furniture and vegetables.

Plan for a lunch or dinner in the south of Amsterdam, get adventurous with your taste-buds and try Surinamese food.  One of the signature dishes here is Viaamse Frites, large french fries served with mayonnaise.

Plan a scenic ride outside the city with your Amsterdam hire car to see the beautiful Dutch Windmills.

The Amsterdam windmills were all originally outside city walls, which is why they are now located in Amsterdam West and Amsterdam South.  The nearest to the city centre are the De Gooyer in Plantage or the Molen van Sloten in the South.