Auckland Airport, airport code AKL, is the largest and busiest airport in New Zealand and the hub of Air New Zealand. The airport provides a significant job outlet for the region plus it is the country's second largest port by value and it services approximately 13 million travellers a year.

Auckland Airport is located 35 minutes, approximately 21 kilometres south of Auckland city centre, and a 20-minute drive from the city of Manukau with your hire car. Surrounded by green fields and the Manukau Harbour, it all makes it convenient to book a discount car hire online to explore the sites and make your way along the island.

All major airlines fly to this airport. The list includes: Air China, Lufthansa, Air Canada, United Airlines, Qantas, Mexicana, Korean Air, Air New Zealand, British Airways and American Airlines amongst others. The airport, as part of their social responsibility initiatives, has implemented several programs. These include a sustainability policy since 2008 and a well-established energy conservation group which has been put into action. The team is dedicated to emissions reduction. Plus the airport even established a college-mentoring program in 1993 to support education.

For car rental in Auckland Airport, New Zealand, find a great variety of rental car options available for both domestic and international travellers. Licensed companies in Auckland Airport are located for your convenience at the terminal buildings as well as in the surrounding area.

New Zealand's size makes it possible to be easily explored in a rental car from Auckland Airport. With 1.600 km in length, the North Island has the biggest population, concentrated in the capital city of Wellington and in the biggest one: Auckland. The South Island is famous for its charming natural scenario.

Hire a car in Auckland Airport, New Zealand and begin a trip along the island. Drive to the east coast in the South Island, a perfect starting point for your tour in car hire vehicle along New Zealand.

Our search engine will help you find the lowest cost car rental deals for 7 seater, 9 seater, luxury car or any other type of rental car for your visit to New Zealand.

Popular since 1985, this location has massive tanks exhibiting large quantities of fish of all sizes, plus a display honouring the underwater investigations of Kelly Tarlton (1935-85). Tickets cost $31 for adults and children 3 – 14 pay $17 if bought online. 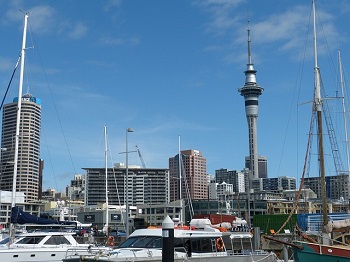 The building itself, built in 1887, featuring towers and high pitched roof is impressive. However more impressive still is the collection of art works it houses, which includes works by McCahon and Wollaston, and oil paintings by Czech artist Gottfried Lindauer, along with some of New Zealand´s earliest works dating back to the time of Captain Cook.

The home of clergyman John Kinder, who came to Auckland in 1855. A clergyman and a painter and photographer, his home today houses a collection of views of Auckland by Kinder himself. It is open from 11am to 3pm all week long.

Rising 305 metres above sea level, it is New Zealand´s highest city. Not only is it also located inside the rim of a volcanic crater but it is also an area of great geothermal activity. However nature´s beauty is not the only means of entertainment. While you are there make sure to check out the Te Puia Cultural performance featuring a 45 minute show of Maori song and dance.

How to Get There in a hire car from Auckland:

Located 234 km from Auckland, take the motorway south, following signs to Hamilton. Once there take State Highway 1 to Tirau and turn off on Highway 5. The drive takes about three and half hours in a rental car from Auckland.

World renowned, it is a unique and rather bizarre experience, something out of a surrealist painting as you find yourself drifting in a boat through a glow worm lit cavern shining with thousands of glow worm lights. ]

How to Get There in a rental car from Auckland:

About 2 hours drive in a hire car from Auckland, the caves are located 8km along Waitomo Caves Road, off State Highway 3.

Containing 150 islands, the Hibiscus Coast is a popular holiday location with excellent beaches. While in the region also visit the township of Russel, the birthplace of European colonization in New Zealand.

How to get there in a hire car from Auckland:

Take highway 1 north, about 3 hours in a rental car to Whangarei, then on to Kawakawa also on highway 1 until it makes a left turn, keep straight and go onto highway 11 to Opua, Russel, Paihia and Waitang