The island is located only about 150 km off the northwestern coast of Africa, but about 1350 km from Europe.  Most tourists head south on the island where the weather is sunnier with less rain than in the north.

If you choose to stay at on of the popular resort communities in the south you can find many local attractions on the way by car hire Gran Canaria Airport.

For car rental in Gran Canaria Airport, you can easily access desks of most rental companies in the Arrivals Hall, between Zones A and B.

Counters for major car hire companies are right before the exit gate of the arrival area. Conveniently located for you to collect your prebooked rental car in Gran Canaria Airport, Spain.

Before arriving to Gran Canaria Airport, make sure to book a discount car hire vehicle.

Our search engine will find for you the best car rental discounts at Gran Canaria Airport, Spain.

Located between Playa del Inglés and Maspalomas is a section of beach-desert area made popular by tourists. 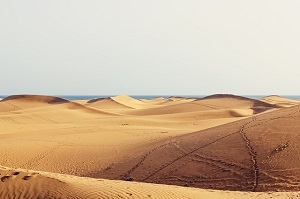 This picturesque village is referred to as "Little Venice" because of its many canals. Puerto de Mogán lies to the west along the southern shore in the Municipality of Mogán. Visit on a Friday and you'll also have the pleasure of seeing a very popular market which brings tourists from all over the island. An easy stop on your way around by Gran Canaria, Spain car hire.

Part of the Tarifa Protected Landscape, this point of geological interest was created by a volcano.  The volcanic caldera reaches 568 m above sea level at the highest point, Pico de Bandama, and is about 1,000 m wide and 200 m deep.

This is an interesting place to see native plants of the Canary Islands.  Take the 30 minute steep walk to the bottom of the cladera and view the different hues of volcanic ash in the area.

Telde has 101 archaelogical sites which you can get around to by car hire in Gran Canaria, Spain.  These include four doors, a large cave with four doors (hence its name) which overlooks the Teldense plain from the top of a mountain; the caves of Tara and Cendro, which were once the center of an ancient population; and las cuevas Chalasia, which consists of a labyrinth series of artificial caves linked by tunnels.

Perhaps not the most traditional of daytrips, but definitely worth the time if you are into the archaeological adventure!

The ture spiritual center of Telde. The still-standing original gateway is an example of Sevillian-Portugese Gothic architecture.

Inside the building are true world marvels: the statue of Christ on the made altar which was made from corn dough by the Tarasco Mexican Indians; the Flemish Gothic main altar, which dates before 1516; and the triptich of the Virgin Mary from the 16th century which depicts five religious scenes.

What trip to an island would be complete without a visit to the beach?  Las Canteras Beach is the beach most preferred by foreign visitors, who can enjoy it at any time of year thanks to the mild climate.  Located on the west side of the isthmus of Guanarteme and runs just over three miles of fine golden sand.

Secure a cheap car rental Gran Canaria, Spain and make sure your trip to the beach is worry free.