For car rental in Granada Airport, you can easily access desks of most rental companies from the arrival area as well as from outside.

Counters for major car hire companies are right before the exit gate of the arrival area. Conveniently located for you to collect your prebooked rental car in Granada  Airport, Spain. The following car rental companies operate in Granada Airport:

For further information on booking your rental car, visit our section How to book a rental car in Granada.

Home of the Carthusian monastery, this district features many buildings created with the extension of the famous University of Granada.  The monastery started in large Gothic style with Baroque exuberant interior decorations.

Located on the extension of the hill of Albaicín along the Darro River, the Sacromonte neighborhood is famous for its cave houses.  In the nineteenth century the area was inhabited predominantly by Gitanos, who choose to dig their houses into the hillside.  Sacromonte is also known as a major centre of flamenco song and dance, including the Zambra Gitana, an Andalusian dance originating in the Middle East.

Granada is very popular among cultural and tourist cities in spain due to its Islamic historical legacy.  The Alhambra is a famous Moorish citadel and palace meaning literally "the red one".  The interior is adorned with columns, muquarnas, and stalactite-like ceiling decorations. 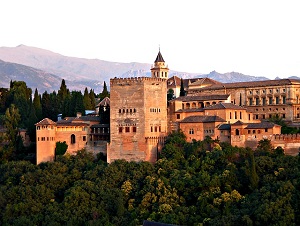 The Alhambra, through all of its restorations and alterations has maintained its original form, designed to reflect the very beauty of Paradise itself.  It is made up of gardens, fountains, streams, a palace, and a mosque, all within an imposing fortress wall flanked by 13 massive towers.  By Airport Granada car hire head towards the southeastern border of Granada to the top of the hill of the Assabica.

A Granada car hire can help you get around to all the different tapas restaurants.  The gastronomy of Granada and the Andalusia region is rich and diverse, and a reason unto itself to visit the area.  There are many eateries where you can taste succulent dishes like migas, remojón, habas con jamón, gazpacho, and the Sacromonte omelet.

However, their famous tapas are really an art form.  The most popular places are Albaicin. Campo del Principe, Realejo, and Plaza de Toros.

Take a car hire Granada over to Zaidin on a Saturday morning for a shopping trip at its large outdoor market, where many gypsies come and sell their wares of fruits and vegetables, clothes and shoes, and other sorts of odds and ends.

This stunning museum was built inside the Castril palace dating from the 16th century.  No where else will you find a collection of artifacts from so many diverse civilizations than here in Granata's Archaeological Museum.  Featuring findings of the Carthaginians, the Phoenicians, the Romans, and the Arabs, all bundled into a magnificent Palace.

Don't miss our detailed section on Granada Hotels for a better look at your options.