The car rental offices in Keflavík International Airport can be found in the Leifur Eiríksson Air Terminal.  The following car rental providers are represented with a service desk inside the terminal: 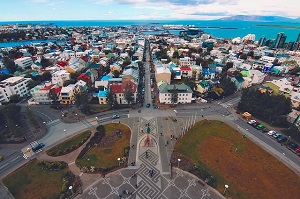 Although the winter nights are quite long in Iceland with nearly 20 hours of darkness a day in December, in early or late winter the country can be quite pleasant, with around 8 hours of enjoyable sunlight and off-peak rates for travel and car rental. Another bonus of a winter tour by car rental in Iceland is the chance to see the beautiful Imagine Peace Tower all lit up.  The tower projects a beacon of light that can be seen from around Reykjavík from October 9 through December, and for a short bit in the end of March.

The capital city is actually one of the best places to whale watch in all of Iceland.  Take your Reykjavík car rental to Faxaflói bay to see some minke whales and maybe even a humpback. Tour ships are available to take you out into the bayand are very affordable.

Soak up the natural warmth of the earth in a geothermal pool during your stay in Iceland by car rental.  There are several to choose from in Reykjavík, and all are just as popular as the pubs for locals. Some of the larger ones even feature steam baths and a water slide! There is even a "Thermal Beach", where they pipe hot water into the Atlantic and you can rest in a pool by a man made beach of golden sand.

Take a day trip to a world wonder of size and scale.  Vatnjökull is Europe's largest national park and it is home to the largest glacier, Europe's largest waterfall, and Iceland's highest mountain.  There are a number of activities you can engage in at the park, or simply go for the awe-inspiring scenery.

A scenic spa experience like no other, the Blue Lagoon is a natural, outdoor pool and health centre located just 39 km from Reykjavík by car hire and only 13 km from the Keflavík International Airport. Soak in the milky blue, geothermal waters surrounded by a lava field of Iceland's Reykjanes Peninsula.

Although Iceland is not well known for its skiing there are opportunities here. Head to the Troll Peninsula for some world class touring ski terrain and heli skiing. More extreme sportsmen can try their hand at ice climbing in Iceland, which is home to the world's most beautiful frozen waterfalls and a few fantastic glaciers.