The main international gateway to the island of Cyprus is Larnaca International Airport. Located 4 km southwest of Larnaca, Cyprus, it has only one passenger terminal. You can set out to travel around the island by requesting a Larnaca Airport car hire to await your arrival at the terminal.

Larnaca Airport is a major hub for passengers traveling between Europe and the Middle East. Since Cyprus has developed into a major tourist destination the air traffic has steadily risen to over 5 million passengers per year, double the capacity the airport was designed for.

The airport is accessible by car, taxi, and public transport system. A shuttle bus system runs 14 trips per day from Limassol, and up to 30 trips per day from Nicosia. While a taxi is a bit more flexible to your schedule and can surely get you to where you want to go, the most convenient option is to set up one car hire Larnaca Airport, which can cover your ground transportation during your stay on the island.

Book your Larnaca car hire vehicle in advance and get the cheapest deals on 7 seater, 9 seater, luxury car and all types of rental car for collection in Larnaca Airport.

For cheap car rental in Larnaca, Cyprus book in advance with us. The best way to tour Larnaca is with your own rental car, this allows you to move around more comfortably and avoid the hassles of public transportation. Our book engine on the right will find for you the cheapest car hire offers in Larnaca Airport.

The Church of St. Lazarus

Cyprus is supposedly the home of the tomb of the biblical Lazarus, brother of Mary. Today you can visit the Church of St. Lazarus, an Orthodox church dating to the 9th century, reputedly built around his tomb. 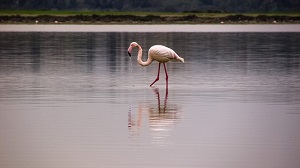 Take your car hire Larnaca to the west end of town near the airport and check out this natural wonder. In winter (November to March), flocks of pink flamingos can be seen here, a truly marvelous sight.

On the banks of the Salt Lake you can also visit the Hala Sultan Tekke, the equivalent to the Christian "monastery". Here lies the tomb of Umm Haram, the foster mother of Prophet Mohammed.

The Ruins of Ancient Kitium

Possibly the most important site of Larnaca, this is the earliest architectural remains, which date back to the 13th century B.C. The ruins of Ancient Kitium were rebuilt by Achaean Greeks. The remains of the Cyclopean Walls, made of giant blocks and the complex with the five temples are also particularly interesting. 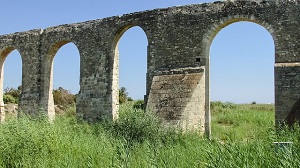 This old aqueduct is located outside the city of Larnaca on the way to Limassol. It was built by the Ottoman Governor Koca Bekir Pasha in Roman style in 1745, and served to carry water from a source about 6 miles south of Larnaca into the town.

Set out in your Larnaca car hire in the evening, stop for dinner at a nice place on the road to Limassol, and catch the aqueduct at night when it is fully illuminated.

The Wreck of the Zenobia

For divers the main reason to come to Larnaca is the wreck of the Zenobia. The ro-ro ferry sank in 1980 on her maiden voyage only a few hundred meters from the harbor due to a fault in the ballast computer. The wreck at 18m is easily accessible even to PADI Advanced Open Water divers.

Reserve a cheap car rental Larnaca and spend the afternoon in the nearby village of Lefarka, famous for its lace and silverware, and do a little shopping. Independent jewelers and watchmakers are abundant here.