Airport Enrico Forlanini, or simply Linate Airport, LIN, is one of the three major airports of Milan, Italy.  Located in the small town of Peschiera Borromeo just 7.8 km south east of Milan, Linate is primarily used for domestic and short-haul international flights.

Make sure when traveling through Linate that you use the correct pronunciation (lee-NAH-teh), as a wrong syllable could direct a cabbie to the nearby borough of Lainate.  Better yet, save the headache and go with a Linate Airport car hire!

Aside from misunderstandings from pronunciation, if you are planning on heading out to the largest metropolitan area in Italy, Milan, you may want to secure your transportation around town.  Milan is recognized as a world fashion and design capital, and is a major global influence in commerce, industry, music, art, and media, making it one of GaWC's major Alpha world cities.  Take on the town in car hire Linate Airport.

Booking your car hire vehicle for Linate Airport in advance is the best way of getting the best deals and cheap car rental offers in 7 seater, 9 seater or any type of car hire vehicle you need for your stay in Milan, Italy.

Quite possibly the world's oldest shopping mall, The Milanese Galleria was an important step in the evolution of the modern glazed and enclosed structures common today.  It was the inspiration for the term galleria, which many other shopping arcades and malls use. 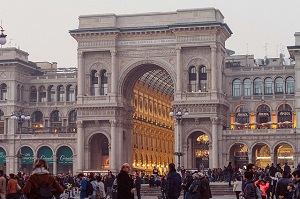 This stunning street is a covered double arcade formed of two glass-vaulted arcades at right angles intersecting in an octagon.  After over 130 years since its opening the four-story arcade still invites visitors to elegant shops selling most everything from haute couture.  Jewelry, books, paintings, eateries, and even a luxurious hotel.

Anyone with an appreciation for architecture will want to visit the largest and most important example of Gothic design in Italy.  Standing today as the fourth largest cathedral in the world, Milan Cathedral was built between 1386 and 1577 and hosts the world's largest collection of marble statues with the widely visible golden Madonna statue on top of its spire.

Such a prominent landmark be hard to spot driving around town in your car hire Milan, Italy.

The best time to view this world renowned opera house in Milan is in the evening before a late performance when the full beauty of the architecture is festooned with lights.  Stop for a photo as you hit the town in the evening by Milan, Italy car hire, or check the local schedules and catch one of the world's leading ballet or opera performances held there.

The very unassuming entrance of this art collection in Milan speaks nothing to what you will find in the interiors.  It houses one of the foremost collections of Italian paintings, an expansion of the cultural program of the Brera Academy, which shares the site in the Palazzo Berea.

The Academy acquired the first paintings of its Pinacoteca during the reassignment of works of Italian art that characterized the Napoleonic era.  Some of its most prized paintings include the San Luca Altarpiece, Supper at Emmaus, Holly Conversation, and The Marriage of the Virgin by Raphael, 1504.

Situated between the Castello Sforzesco and the arch of Peace is a lovely public park constructed by Emilio Alemanga.  The park features a Napoleonic Arena, the Civico Acquario di Milano (Civic Aquarium of Milan), a tower, an art exhibition centre, some ponds and a library.  All in all, quite a lot of things to do and see for just a day in the park!

Set up a cheap rental car Milan, Italy and hop over to the Monte Napoleone district for the Bagatti Valsecci Museum. These Italian Renaissance art and decorative arts collections of the barons Bagatti Valsecci are displayed in their home at this not-for-profit.  Experience not only particular pieces of art, but also the house's authentic ambiances, unique of late 19th century Milanese aristocrats.