Fly into Milan's largest airport, Milano Malpensa Airport. Formerly known as Aeroporto Città di Busto Arsizio, it is located 40 km northwest of central Milan, Italy. The airport is connected to Milan by the Malpensa Express train which takes about 40 minutes, or you can take a car hire Milan Airport to the city via the Milano-Varese highway.

Malpensa is the top Italian airport in terms of international traffic and is also the leading air freight gateway. The two terminals are connected by a free shuttle bus service. There are many ways to get to the city from the airport. In addition to the Express Train you can take the S-line, a bus, or a taxi, which tend to be expensive. However, if you would like to take care of all your ground transportation around Milan you can reserve a Milan Airport car hire to await your arrival.

While not as famous for its sights, Milan is a city about lifestyle and enjoying worldly pleasures. here you will find a Paradise for shoppers, opera, and posh nightlife. Milan is the marketplace for Italian fashion. Don't be surprised to pass supermodels or the international paparazzi that follow them to the city if you visit during the spring or autumn.

Booking your car hire vehicle for Malpensa Airport in advance is the best way of getting the best deals and cheap car rental offers in 7 seater, 9 seater or any type of car hire vehicle you need for your stay in Milan, Italy.

Here you can visit the Statue of Leonardo Da Vinci and catch a show at La Scala Theater. This is a great place for a photograph. The ticket office for La Scala theater is underground in the Duomo Metropolitana stop. 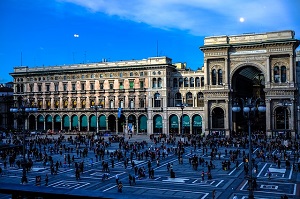 While you are in the area around the Piazza Della Scala you should stop in and visit this Galleria, known as 'the mother of all shopping malls'. Filled with upscale shops in a splendid 19th century palace of a mall.

Take your car hire Milan, Italy around to the beautiful and historic churches of Milan. Milan has the oldest churches in Italy. The Duomo, in Duomo Square, is Milan's main cathedral. This massive Gothic church is an ornate and pristine white marble wonder, with hundreds of spires and thousands of statues on its exterior.

You can climb onto the roof and enjoy spectacular views of the city between the Gothic spires.

This is a set of blocks which forms the main shopping area for the top names in Milan. The area runs roughly between Duomo Square, Cavour Square, and San Babila Square. Among Montenapoleone Street, Della Spiga Street, Vittorio Emanuele Street and Mazoni Street, you can find the mot prestigious boutiques and showrooms in the world.

Just an hours drive from the city in your Milan, Italy car hire you can get to where the goods are actually affordable; outlet shopping. Reputed to be the first designer outlet in Italy and the biggest in Europe, Serravalle has over 180 stores with clothing, footwear and accessories. There are even a children's playground, bars, and restaurants.

Once you've gotten the shopping out of your system, save on a cheap car rental Milan, Italy and take a daytrip to the villages of Como, Menaggio, Bellagio, and Varenna around the city of Milan. Como is known for its huge and impressive lake on the foothills of the Alps.