The main domestic hub and international airport for Norway is the Oslo Airport Gardermoen.  The airport connects to 25 domestic, 27 European, and 5 intercontinental destinations.  Located at Gardermoen in Ullensaker, it is 47 km northeast of Oslo.  With an Oslo Airport car hire you can reach the city centre by Norwegian National Road 35, which connects as a four-lane motorway to the European Route E6 to Oslo, Oppland, Hedmark, and Central Norway.

The terminal at Oslo Airport, Gardermoen is unique in that it is "silent", so announcements for flights are only audible in the immediate vicinity of the gate.  Its exceptionally kid friendly, with playgrounds in both the domestic and international sections, plus a quite room in the domestic section.  There are twenty eating places here to hold you over until you get to the city.

Oslo is a city in close contact with the nature surrounding it, in fact, most of its 453 square kilometres are forest.  Here moose are commonplace and the whole of the capital is part of Norway's wolf reserve. There are plenty of interesting sites in walking distance around the city centre, however several of the neighbourhoods have worthwhile sights and entertainment offerings, so to explore these and the abundant flora and fauna outside the city it is best to take a car hire from Oslo Airport.

Book your Oslo car hire vehicle in advance and get the cheapest deals on 7 seater, 9 seater, luxury car and all types of rental car for collection in Oslo Gardermoen Airport.

For cheap car rental in Oslo, Norway book in advance with us. The best way to tour Oslo is with your own rental car, this allows you to move around more comfortably and avoid the hassles of public transportation. Our book engine on the right will find for you the cheapest car hire offers in Oslo Gardermoen Airport. 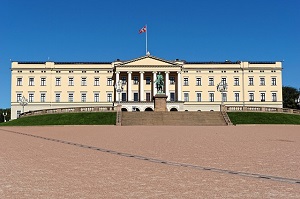 As you travel down the city's main avenue at the end of Karl Johans gate you will find the Royal Palace.  Look for one of the 2 tours offered daily in English.

With over a million visitors every year this is one of the biggest tourist attractions in Norway.  Holmenkollen is a ski jump located on the west side of Oslo.  Here you can also visit the oldest ski museum in the world, opened in 1923.  During the summer the area is open to walking and mountain bike riding.

Who won it and what did they do?  Here you can find the answers, with an exhibit for every winner of the Nobel Peace Prize.  There are some confronting exhibitions as well.  Very interesting and educational.  Reach it by Oslo, Norway car hire from the T-Nationaltheateret.

Located just outside the city is a peninsula called Bygdøy, where you will find two groups of Museums within walking distance of each other.  The first group contains the Norwegian Museum of Cultural History and the Viking Ship Museum, featuring 1100 year old Viking ships complete with ancient skeletons.

The second group of museums is on the harbor and has the Norwegian Maritime Museum, the Kon-Tiki Museum with artifacts from Easter Island, and the Fram-Museum.  Save on your daytrip to the museums with an Oslo Pass, good for most museum admissions, and a cheap car rental Oslo, Norway.

Get out into nature in the large forest surrounding the city.  This is an important recreational area for the citizens of Oslo, and quite unique for a capital.

Take your car hire Oslo, Norway out to lunch by the coastal area south of the city hall.  Here you will find many outdoor restaurants and bars and an abundance of tasty sea-food.