Southampton Airport in Hampshire, England is a relatively small airport, flying only to the UK, Ireland, Channel Islands, France, Spain, Portugal, Belgium, the Netherlands, Germany, Austria, and Switzerland.  It is the primary airport for the city of Southampton which is over 60 miles away from Heathrow Airport, and roughly 80 miles drive by car rental from Gatwick Airport.

The popular budget carrier Flybe offers a number of regularly scheduled and seasonal flights from Southampton Airport, including many popular destinations in Spain such as Bordeaux and Palma (Majorca).  The airport is reputed to be built on the remains of a Roman Villa, and during the 1920's it's hangers were converted into dormitories, kitchens and dining rooms for would-be Ukrainian Jewish emigrants who were blocked from entering the United States.  You can begin your stay in Southampton with a cheap car rental from Southampton Airport.

Southampton Airport has a Car Rental Reception Centre conveniently located opposite it's terminal building, next to the Short Stay Car Park.  There you will find the following car rental providers:

The place to be when the weather is nice is Southampton Common.  Here you can enjoy sunshine activities like a paddling pool, play area, fishing lake, and plenty of great people-watching.  The area also encompasses 326 acres of grass and woodland and includes an Urban Wildlife Centre.  Plan an afternoon in the Common by Southampton car hire. 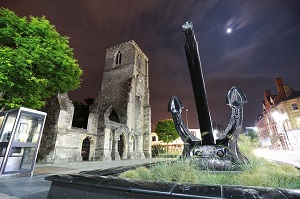 As you make your way around Southampton by car rental you will surely notice the relatively modern look to most of the city and its architecture.  Though as a settlement it dates back to Roman and Saxon times it was nearly destroyed by boming during the second World War.  Despite this, its town walls remain among the most complete in England.  The tour of the remaining walls includes historic gatehouses and towers and the famous Bargate.

Take time to tour some of the many notable Museums and Galleries during your visit in Southampton by car hire.  The John Hansard Gallery is one of the most popular collections of contemporary visual art in the country, and hosts various events during the year such as workshops and seminars.  The history of the city can be discovered in the Museum of Archaeology, which traces its history back to its origins as a Roman town.

Southampton is actually the closest airport to one of England's most popular tourist areas.  The New Forest is a National Park in the South East of England where you can go camping, cycling, horseback riding, or walking.  The area is neither a forest nor new, but it's beautiful and it features its own breed of semi-wild ponies!

Take a day trip by Southampton car rental to see Winchester Cathedral, which houses the Winchester Bible and features the longest Gothic nave in the world!  The amazing story of the Cathedral's architectural beginnings and the Winchester Diver are worth the trip alone.  Winchester is only around 8 miles from Southampton Airport, so its an easy visit to fit into your itinerary.

Enjoy some time shopping and visit the beach in Bournemouth by Southampton Airport car rental.  This old spa town has been pampering guests since the 1800s and there are many fancy treatments here to help you unwind during your trip.  Bournemouth also has an Oceanarium, tethered balloon flights, and a good range of high street outlets and independent shops.