Named for the nearby Pulkovo hills, Pulkovo Airport, LED, in St. Petersburg, Russia sees about 5 million passengers per year.  There are two terminals here, Pulkovo-1 which is mostly for domestic flights, and Pulkovo-2 which is reserved for international flights, and is located about 17 km south of the city centre.

If you choose to get around town by St. Petersburg Airport car hire, Pulkovo Airport is accessible via the nearby Pulkoskoe shosse motorway to the city center.  Located on the scenic Neva river at the head of the Gulf of Finland on the Baltic Sea, the city known as Petrograd, Leningrad, Piter, or just Petersburg, it is an important Russian port on the Baltic sea.  See what all this sea town has to offer by   car hire St. Petersburg Airport.

Well known in history as the setting of many events of worldwide significance, including Bloody Sunday (1905) and the October Revolution of 1917.  The Palace Square connects Nevsky Prospekt with Palace Bridge leading to Vasilievsky Island.  It is the central city square of St. Petersburg and the former Russian Empire. 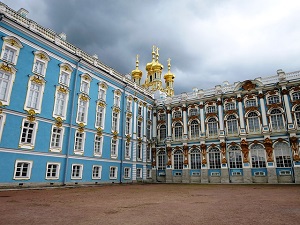 The Square features the baroque Winer Palace of Russian tzars, the bow-shaped Empire-style Building of the General Staff, and the building of the Buards Corps Headquarters.  In the center is the Alexander Column of red granite, the tallest of its kind in the world.

From Palace Square in the centre of the city it is easy to plot your course by car hire St. Petersburg, Russia and set out for your next destination.

The Church of the Savior on Spilled Blood

Once you view the exterior one can easily see how this church is deserving of such a dramatic name.  The name refers to the blood of Tsar Alexander II of Russia, who was assassinated on the site in 1881.

Differing greatly from the Baroque and Neoclassical architecture commonly found around the city, the Saviour on Blood harks back to medieval Russian architecture in the style of Romantic Nationalism.  The interior features over 7500 square meters of mosaics, more than any other church in the world!

Home of one of St. Petersburg's most recognizable monuments, The Bronze Horseman.  Also known as Senate Square or Peter's Square it is situated on the left bank of the Bolshaya Neva in front of Saint Isaac's Cathedral.  Its name stems from the Decembrist Revolt of 1825 which took place there.

You can drive right onto this island by St. Petersburg, Russia car hire via either Palace Bridge or Blagoveshchensky Bridge, two of the most famous bridges of the city.  The island is located in the delta of the river Neva, between its two arms Bolshaya Neva and Malaya Neva.

In the south and east of the island you will find mostly old buildings from the 19th century.  Most visitors head for the eastern most tip where you can find a number of museums, including the Old Saint Petersburg Stock Exchange, the Imperial Academy of Sciences, and St. Andrew's Cathedral.  There is even an animated musical fountain just off the split of the Island.

This little town developed around the Pavlovsk Palace, one of the most splendid residences of the Russian Imperial family.  In Pavlovsk you can also visit the old Railway station Pawlowsk, the domed palace of Emperor Paul, and the largest English garden in Russia, Pavlovsk park, which features the greek-styled Friendship temple.

Founded in 1764 by Catherine the great, the State Hermitage Museum of art and culture is one of the oldest and largest museums of the world.  This museum proudly boasts collection of paintings in the world!

The entrance is free of charge the first Thursday of every month for all visitors, and daily for students and children.  So make an inexpensive day of it and head over on Thursday in your cheap car rental St. Petersburg.