The Toronto Pearson International Airport is a convenient option to arrive into Toronto, Ontario. It is serviced by most major international carriers and offers fast and efficient facilities. There are only two terminals, but they are known as Terminal 1 and Terminal 3. Located just 30 minutes by car from downtown Toronto, it is the perfect place to meet your Toronto Airport car hire.

Toronto is the cultural and economic focus of English Canada, and the fifth most populous municipality in North America. It is one of the most culturally and ethnically diverse cities in the world with more than 80 ethnic communities represented and over half the city's residents harking from outside Canada. Explore the city's rich cultural diversity with a car hire from Toronto Airport.

Book your Toronto car hire vehicle in advance and get the cheapest deals on 7 seater, 9 seater, luxury car and all types of rental car for collection in Toronto Airport.

For cheap car rental in Toronto, Canada book in advance with us. The best way to tour Toronto is with your own rental car, this allows you to move around more comfortably and avoid the hassles of public transportation. Our book engine on the right will find for you the cheapest car hire offers in Toronto Airport. 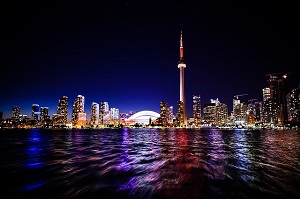 Visit one of the best and largest museums in North America. This impressive building features a large deconstructivistic crystal made of steel and glass. The museum houses thousands of artifacts and specimens in exhibits such as Dinosaurs, Native Canadians, Medieval Europe, Ancient Egypt, and the world's largest totem pole.

Tour the three main sections of beaches along Lake Ontario in your Toronto car hire. Among them you will find a respite from the city, some popular hang outs for youth, and beautiful views out over the lake.

Toronto's own branch of the world famous comedy improv theatre Second City is an excellent attraction for any visit. Head to downtown Toronto for a night of great improv and situation comedy performed live with audience participation over dinner and drinks.

Park your Toronto car hire on Bay St. and take an inexpensive ferry ride to the Toronto Islands. Great for cycling, walking, picnics, or just relaxing, the Islands offer great views of the skyline plenty of great daytrip activities - there is even a small amusement park!

If the amusement park on the islands isn't enough for you check out the big theme park located just 30 km north of Toronto in Vaughan. Housing more than 200 attractions it is considered one of the best in North America and definitely worth adding to your itinerary.

Since you're so close you should take the time to see one of the most famous natural wonders in North America, Niagara Falls. The Niagara Region is only an hour's drive south of Toronto by car hire.