Bosnia and Herzegovina for a small country on the Balkan peninsula with a stunning, mountainous landscape and a rich, multiethnic culture.  Generally shortened to simply BiH, Bosnia and Herzegovina offer travelers by car rental an exciting mix of cosmopolitan cities, wild nature, health spas, and picturesque little towns. 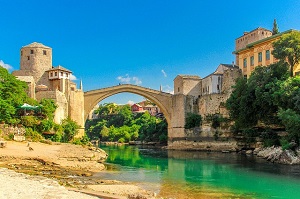 Although B  A welcoming country with great international relations, citizens of the European Union, United States, as well as much of the Americas, Japan, New Zealand, and Singapore will not need a visa for entry.

For convenient travel directly into the country you can pick up your car rental from Sarajevo International Airport.  This is the best way to begin your tour in the nation's capital, which features a unique Eastern European feel and an abundance of diverse and interesting architectural styles.  There are also international airports located in the cities of Mostar, Tuzla, and Banja Luka, which offer connections to major cities such as Istanbul, Frankfurt, Zurich, Liubljana, and Belgrade.  Banja Luka is the capital of the Republic of Serbia, which is known for its nightlife and historical sites.

Alternatively, many travellers to choose to fly into Croatia and drive by car hire into Bosnia and Herzegovina.  It is recommended to reserve a 4x4 car hire in BiH due to the condition of the roads and mountainous terrain.  Drivers should be advised that the majority of the roads here are only two lanes, lack guardrails, are full of curves, and can be quite narrow in places.  Road blocks due to landslides, de-mining activity, and traffic accidents are common.

Proceed with your car rental reservation in Bosnia and Herzegovina by selecting a pick up location from the list below.  Then simply complete the booking engine with your travel specifics.