Located in Vantaa, Finland, Helsinki-Vantaa Airport is the main international airport of the Helsinki metropolitan region and the whole of Finland. Originally built for the 1952 Summer Olympics in Helsinki, the airport now serves over 13 million passengers per year and is the fourth largest aiprot in the Nordic countries.  It is located just 17 km north of Helsinki city centre and can be reached easily by Helsinki Airport car hire.

It was chosen as the best airport in the world in the IATA survey, and is known as the most punctual airport in Europe.  Located near the airport is the Aviapolis business park, hosting many companies around the world, as well as the Finnish Aviation Museum.

Known as the "Daughter of the Baltic", Helsinki has been the capital of Finland since 1812.  Although it has become an international metropolis it still retains its small-town feel.  Arrange a car hire Helsinki Airport to await your arrival and head out to explore the city.

Book your Helsinki car hire vehicle in advance and get the cheapest deals on 7 seater, 9 seater, luxury car and all types of rental car for collection in Helsinki Vantaa Airport.

For cheap car rental in Helsinki, Finland book in advance with us. The best way to tour Helsinki is with your own rental car, this allows you to move around more comfortably and avoid the hassles of public transportation. Our book engine on the right will find for you the cheapest car hire offers in Helsinki Vantaa Airport.

Oddly, this is the unoffical symbol fo the city.  This striking white cathedral dominates the central Senate Square.  The roof features the 12 apostles, which were touched up when the cathedral was refurbished recently and now look better than ever. 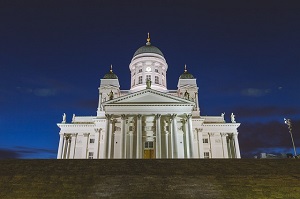 Take your car hire Helsinki, Finland out to Senate Square and enjoy the many other attractions in the area.

If you are visiting Finland with your children this is museum is a must on your list of attractions.

Explore its hands-on science tests and exhibitions plus Verne super-cinema.  Visit the Heureka Shop where you can take home some interesting sceince-related memorabilia.

Located in the Sibelius park, the monument to the world-famous composer Jean Sibelius was designed by sculptress Eila Hitunen and unveiled for the city in 1967.  It is one of Helsinki's best well-known tourist attractions and is featured in nearly every guided tour.

This marvelous work of art resembling organ pipes was welded together from 600 pipes and weighs over 24 metric tons.

If you get the chance to visit Helsinki in the summer make sure you visit Soumenlinna.  Known as the "Gibraltar of the North", it was once the greatest sea fortress in the Baltic, built by the Swedish in the mid 1700s to protect their eastern flank.

The town is still living in its own time with only old buildings, few cars, and less than a thousand residents.  There are excellent places to explore like its old fortifications, catacombs, and cast iron cannons.

Another island in the beautiful archipelago that surrounds the Helsinki city center.  Leave your Helsinki, Finland car hire at Merisatama peir in the southern end of Kaivopuisto Park and take a ferry to the sandy beaches of Pihlajasaari.

Few tourists find their way here but it is very popular during the summer with Helsinkians.  enjoy the nude beach and ciders.

This farm is open by arrangement all year round.  Find out what a typical Finnish farm is like.  Located in the village of Sotunki, surrounded by a picturesque landscape, this is a lovely trip in your cheap car rental Helsinki Finland.

On the farm you can meet the typical animals representing traditional Finnish stock: cows, sheep, goats, pigs, horses, and more.