Gatwick Airport, airport code LGW, is known as the world's busiest single runway airport. It links London to the world servicing destinations from Athens to Zagred and everything in between. It is also the second largest airport in the UK and the eight largest in Europe.

Situated 45 km south of London, it is linked directly to the city via the M23 at Junction 9 and to the A23 London-Brighton road, which makes it convenient to book a discount car hire online to explore the sites as you make your way into the city. Having your own means of transportation waiting for you, at the airport, upon arrival, means you can avoid the hassle of public transportation.

The airport currently has about 90 airlines that fly regularly into its two terminals, servicing over 200 international destinations and 13 domestic. It remains open 24 hours a day, 365 days a year and caters to approximately 32 million passengers a year. Its top ten international destinations are Malaga, Dublin, Faro, Orlando, Alicante, Geneva, Palma, Madrid, Tenerife, and Amsterdam.

For car rental in London Gatwick Airport find counters for main car rental companies in front of both terminal buildings.

Book your London car rental vehicle in advance and get the best discounts on 7 seater, 9 seater, luxury car or any other type or rental car to make your stay in London easier and more comfortable. User our search engine on the right to find the cheapest car rental deals for collection in London Gatwick Airport.

Exhibiting man's progress through the ages, the museum houses works from prehistoric to modern times from around the world. Most notes amongst its collection is the Rosetta Stone, Parthenon sculptures and the Portland Vase. 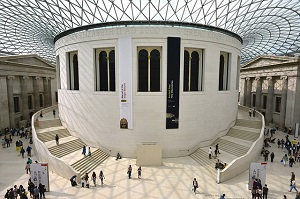 Entrance is free however tickets are required for special exhibitions.

From London Gatwick Airport drive in your own rental car for an easier mobility around London.

This is Britain's national museum focusing solely on exhibiting modern art. Located on the banks of the river Thames, it displays masterpieces by Matisse, Picasso and exhibits an array of collections of contemporary work and installations.

A 7 seater or 9 seater car hire vehicle in Gatwick Airport is the best option when travelling in large groups in London.

View London from the heights  when you take a ride in London's Eye to appreciate the sights of over 55 of London's famous landmarks.

The ride lasts 30 minutes and tickets cost 17.88 pounds for adults and 9.50 pounds for children ages 4 to 15. Operating hours are 10am to 8pm except on Christmas Eve, Christmas day and New Years.

A rental car from London Gatwick Airport is the best option to move around and enjoy the city in comfort and freedom, in a cheap car hire vehicle in London.

Known for its Roman Baths and Georgian architecture, this quaint town offers great outdoor and free entertainment. Bands play frequently along the Avon River and it is also a great place to take a stroll and browse the shops along the Pulteney Bridge.

A place of history and charm, the entire city has been declared a UNESCO World Heritage Site. Famous residents included Jane Austen.

How to get there in a rental car from London:

It is about 180 km from London which usually takes 1hr 40 minutes driving time in a rental car from London.

Take the M4 motorway westward out of London and turn off at Junction 18 followed by a left turn onto the A46 to Bath.

A university town dominated by its highly acclaimed educational institution, making over 15% the town's population students. However, recently, the city has also been home to many movie sets and backdrop for many movie settings.

Recognizable sights around the city have been features in Harry Potter films, and also in the 80's flick 'A Fish Called Wanda'. Its worth a visit to admire its medieval streets, the Bodleian Library and the punters on the River Cherwell.

How to get there in a hire car from London:

Located 62 miles northwest of London, it takes about an hour and a half to drive there in a London car hire vehicle via the M4,M25,M40 and A roads.

Known for its white cliffs and its castle, it is a location that has much more to offer. While you are there plan to have time to visit its harbor, old pubs and historic Market Square to complete your visit.

Also not to miss is a bizarre bronze age boat housed at the Dover museum.

Find the best London Hotels and enjoy your stay in London, England