Malta has just one international airport providing access to the entire Maltese Archipelago, located between Luqa and Gudja.  The Malta International Airport is just 5 km southwest of the Maltese capital Valletta.  It hosts many popular and holiday airlines, including Air Malta, and is set to be a base for the popular low cost carrier Ryanair as well.  You can save the most on your trip to Malta with a cheap car rental from Malta Airport.

The archipelago of Malta lies south of the island of Sicily in the Mediterranean Sea.  The largest of the three inhabited islands, Malta, is very popular as a summer destination for its warm, Mediterranean climate.  For such a small island nation Malta has a long, rich history that goes back to the 4th millennium B.C.  All in one destination you can visit some of the world's most ancient standing buildings, enjoy a lively nightlife and entertainment, or relax on some of the world's finest sandy beaches.  Pick up your car hire at Malta Airport and enjoy private transportation and you explore these and other area attractions.

The car rental offices in Malta Airport are located near the luggage retrieval in Arrivals, past the exit doors, into the Welcomers' Hall.  There you will find the following car rental service desks: 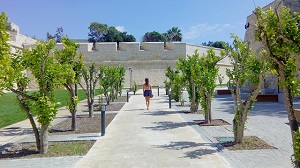 One of the most impressive sites on the island is the ancient capital of Mdina, seated high at the center of the island.  Mdina has beautiful architecture and splendid views of the surrounding city of Rabat.  Known as the Silent City, the ancient capital has a long and interesting history worth checking out during your tour of Malta by car rental.

Head to the Northwest coast of the island in your Malta car rental for a day at one of Malta's most beautiful beaches.  Here the sand and Mediterranean sea stretch on to provide a picturesque view like you've only seen on post cards.  Malta's beaches are also great places to find family activities, water sports, or a peaceful spot to relax.

Drive around the south of Malta by car hire to find the series of seven caves and inlets that make up what is known as the Blue Grotto.  These natural rock formations form a spectacular place of deep blue waters which you can tour from the pier in a traditional boat.

The neighboring island Goza is home to some of the world's oldest megalithic temples.  These structures have perplexed modern man for all of our known history; their construction would be difficult even with our largest and most modern equipment.  Take a tour of the countryside in a cheap Malta car rental that includes these mysterious ancient sites.

The smallest of Malta's three inhabited islands, Comino is a great place to see the local flora and fauna.  Most of the island is a nature reserve, and it has a distinct feel of peace and isolation from civilization.  There isn't much in the way of a tourism infrastructure on Comino, but it makes for a lovely day trip from Malta.