Germany's Munich Franz Joseph Strauss Airport, MUC, lies in direct proximity to the old city of Freising and its namesake is that of a German politician, Franz Josef Strauss.  A full 28.5 km northeast of Munich, travelers may find a car hire from Munich Airport a convenient option for getting to and from the city.

Coming from the second busiest airport in Germany, you may find you bump up against some traffic as one of over 34 million who are likely to pass through Franz Joseph Strauss Airport in a year.  The airport authorities have set out to cater to visitors and sight-seers with the additions of a 'Visitors Park' and 'Visitors Hill' providing great views of well, planes.

Adjacent to Terminal 2 at Munich airport is a 5 star hotel offering non-guests access to its pool, fitness and spa area for a nominal fee.  They also offer cocktail parties after regular business hours for guests and visitors.  Remember to make arrangements if you won't be staying in the hotel for the night, such as Munich Airport car hire.

Our search engine on the right will find for you low cost car rental deals for you to book in advance and get the cheapest rental car options. Find discounts on 7 seater, 9 seater, luxury car or any other type of rental car to collect at your arrival to Munich Airport.

In the center of Munich is a large open square, the Marienplatz, with a Marian column in its centre.  Here you can see the Old and New Town Hall and the Rathaus-Clockenspiel.  Follow the Karlstor up to the Stachus, a grand square with the notable Justipalast (Palace of Justice) and a fountain.

The cathedral for the Archdiocese of Munich and Freising, Frauenkirche is undoubtedly the most famous building in the city centre.  Nearby lies the largest renaissance church north of the alps, the Michaelskirche.  Thats two birds with one stone, or two famous churches with one set of car rental Munich, Germany directions! 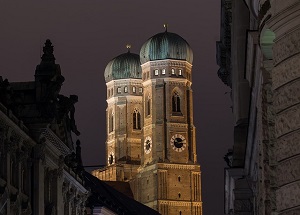 One of four grand royal avenues of the 19th century with magnificent official buildings which connect Munich's inner city with the suburbs.  Maximilianstrasse is the place to go for designer shops, luxury boutiques, and jewelry stores.  This avenue framed by neo-Gothic buildings also leads to Munich's Museum of Ethnology.  Take your time in a car hire Munich, Germany.

Mix up your sight seeing with a day of modern architecture in Munich's Northern edge skyline.  Stunning sky-high creations like Hypo-Haus, the Arabella High-Rise Building, the Highlight Towers, Uptown Munich, Müncher Tor, and of course the BMW Headquarters!

Segregated from the suburbs due to strict culturally sensitive height limitations for buildings to preserve the city views of the distant Bavarian Alps, its skyline is a worthwhile photo-op by cheap car rental Munich, Germany.

No trip to Munich is complete without an afternoon at one of the oldest and largest science museums in the world.  Home of the Verkehrsmuseum, the land transport collections of the Deutches Museum.  Also nearby is the Schleissheim Special Landing Field, as well as several other collections including paleontology, geology, mineralogy, zoology, botany, and anthropology.