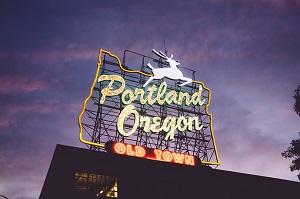 Don't miss out on the unique selection of museums during your tour of Portland by car rental.  A day of museums can be a cheap way to enjoy the city, and some offer a free day during the month, such as the Museum of Contemporary Craft which is free on the first Thursday of the month.  The Oregon Museum of Science and Industry is a Portland favorite, full of hands-on activities and featuring an old navy submarine.

Portland proudly boasts the second-largest hammered-copper statue in the United States, outsized only by the Statue of Liberty.  Portlandia depicts a woman bearing a trident, crouching down in a welcoming gesture.  Although it is quite large, you will not likely find it unless you intend to; head to 5th Ave in your Portland car rental and look for the red, blue, and tan Portland Building.

During the summer months a rose garden of this scale and beauty exists nowhere else in the world.  If you plan your visit between May and July you can take a free tour of the gardens right when everything is fragrant and in bloom.  Tours are given by volunteer gardeners at 1PM.

In early June you can also attend the Portland Rose Festival, the largest event of the city.  Witness the Portland waterfront transformed into a carnival complete with military ships, a Grand Floral Parade, fireworks, and a dragon boat race.

Visible behind the Portland skyline, the majestic Mount Hood is the highest mountain in the state of Oregon, and just over 50 miles from the city by Portland car hire.  In the winter you can plan a ski or snowboarding day trip to Mount Hood, and in the spring and summer months it is a great place for hiking.  Timberline near Mount Hood offers a year-round ski, boasting the longest ski season in North America.

The breathtaking 620 ft Multnomah falls is only 25 miles from downtown Portland by car hire.  There is a paved trail to the top which offers a scenic view well worth the effort.  Hiking trails feature a number of smaller falls along the way, some of which freeze in the winter.

The Oregon Wine Country is located roughly 25 miles to the southwest of Portland by car rental.  Here you can take your choice of tours among these beautiful west coast vineyards.  More than 100 wineries spot the area, plenty of which have tasting rooms.  Sample the signature Pinot Noir and Pinot Gris of Oregon.