In a city known as the 'cradle of the automobile' tourists are often surprised to fine the variety of hills spotted with vineyards, valleys, and parks, unusual for any German city.  In 2008 the city declared itself as "das neue Herz Europas" ("The new heart of Europe"), and perhaps you will agree as you drive through this lush valley by Stuttgart Airport car hire.

Our search engine on the right will find for you low cost car rental deals for you to book in advance and get the cheapest rental car options. Find discounts on 7 seater, 9 seater, luxury car or any other type of rental car to collect at your arrival to Stuttgart Airport.

Known as the Collegiate Church, Stiftskirche dates back to the 12th century.  Following the popular styles of the day it was remodeled in the 15th century to a more Late Gothic façade, and has been a Protestant church since 1534.  The earlier, more lavish Romanesque interior was simplified after World War II, when it was reconstructed due to damage

Perhaps the idea of Solitude comes from this buildings original use as a hunting lodge.  Built between 1764 and 1769, it is not a true castle, but rather a rococo palace.  The exterior style is typical Rococo and the interior is characteristic of classicism.

Solitudeallee, a partially tree-lined straight avenue leads 13 km from the northern main gate of Castle Solitude directly to Ludwisburg.  Maybe not the most direct route to and from Stuttgart, but perhaps a lovely scenic detour by Stuttgart, Germany car hire. 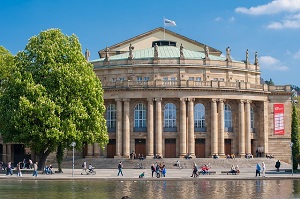 This is the only major german opera house to survive the bombing of the Second World War.  Known locally as the Grosses Haus, or commonly as Stuttgart national Theater, it was constructed between 1909 and 1912.

Its a long walk down the Königstraße, reputed to be the longest pedestrianized street in Germany.  Here you can spend the day shopping your hart out in Stuttgart's most important Shopping street.  Running along the northwestern edge of Schlossplatz, you may want to plan for a car hire Stuttgart, Germany to avoid humping all your purchases along the way.

The Wilhelma was originally a Moorish Revival-style royal palace.  After World War II it was gradually converted to Europe's only large combined zoological and botanical garden.  It is home to over 8,000 animals and countless exotic plants from over 5,000 species.

Translated literally as 'fire lake', Feuersee is an area and also the name of two lakes.  The one located in the area of Feuersee partially surrounds a stunning Gothic church, creating a striking and mystical view.  The other Feuersee is located in Vaihingen.  Its a day through picturesque towns to this startling combination of nature and architecture which will prove your cheap car rental Stuttgart, Germany worth every penny.