Bologna Airport is located 6 km northwest of the Bologna town centre in the Emilia-Romagna region of Italy. It is also only 200 km from Milan, just a daytrip away. You can reach Bologna by taxi or Aerobus, but the most convenient way is to have a Bologna Airport car hire waiting on your arrival.

Also known as Guglielmo Marconi International Airport, it is served by a number of popular airlines, including the low-cost Ryanair, British Airways, and Turkish Airlines. Flights run daily to London, Istanbul, Amsterdam, Dublin, Edinburgh, and many more international locations. The city is at the junction of the A1, A14 and A13 roads, and is easily accessible from anywhere in Italy. Enjoy travelling through the city and beyond with the ease of a Bologna car hire.

Booking your car hire vehicle for Bologna Airport in advance is the best way of getting the best deals and cheap car rental offers on 7 seater, 9 seater or any type of car hire vehicle you need for your stay in Bologna, Italy. 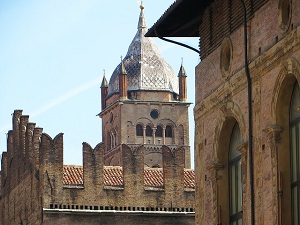 Explore the large pedestrian square located in the centre of the old part of the city. Here you can visit the Basilica of San Petronio, the City Hall Building, the portico dei Banchi and the Palazzo del Podestà.

Take your Bologna car hire over to one of Bologna's well-regarded symbols. The fountain of Neptune was built in 1563 by Tommaso Laureti of Palermo and later embellished by Jean de Boulogne (called Giambologna).

Located on Guardia hill, St. Luke's Basillica offers a panoramic view of the city. Enjoy the amazing walk along the 666 arches of its unique portico to reach the Basilica. Dating back to the mid 18th century, it has a peculiar layout in a round shape. The city icon the Madonna di San Luca is housed here.

The Botanical Gardens in Via Imerio were created in the mid 16th century for medicinal herbs. This garden is a must-see visit for anyone interested in the history of natural medicine. Currently the second largest park in the city, the Botanical gardens house over 5,000 plant species. Featured here are a full-grown sequoia and a greenhouse for cacti and carnivorous plants.

How marvellous to bring back the skills to create new Italian dishes as a souvenir of your trip! Spend the day cooking with Carmelita of Cook Italy, the longest established Bologna cooking-school.

Carmelita customizes the menu so that you get to cook and eat the traditional Bologna meal of your dreams! Head over to Via Marsala 16 in your Bologna car hire.

Located just outside the city centre are many places to catch an excellent concert. Reserve a cheap car rental Bologna and check out the Estragon and Link. Bologna is an Italian hub for rock, electronic, and alternative music. With almost a hundred concerts every year by international bands, it is very likely there will be a concert during the time of your visit.